The pandemic has had a devastating impact, having infected over 110 million people worldwide. Covid-19 began in China when the virus made the jump from bats to humans. Since bats face very few side effects from the viruses they host, they are excellent at carrying and spreading the viruses. A new study suggests climate change may have facilitated the spread of Covid-19.

The areas that increased in bat species density due to climate change were found in Central Africa, South and Central America, Myanmar, and Laos. The bats associated with Covid-19 are most likely endemic to Laos. In this area, climate change drove up the bat population of 40 different species. The increased population of species would have allowed for cross-species viral transmission, which could have caused the virus to jump to humans. The reason for the increased population wasn’t because the vegetation was changed in size. Instead, the data suggests that over the last century, tropical shrublands have become woodland. This change was facilitated by higher CO2 levels, increased temperature, different precipitation patterns, and less cloud cover. The new environment encouraged growth in bat species that require forest type habitats. The map below displays the correlation between areas heavily affected by climate change and bat populations. 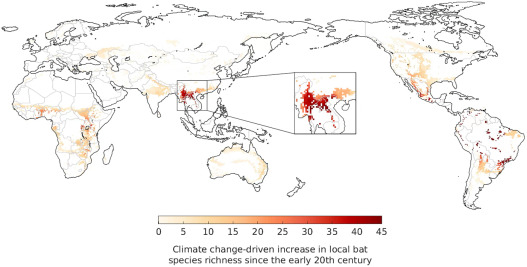